While the cat's away

Without a corkscrew, thank goodness!
HAHHAHAHA
BUT- spoiled [the appearance] of some of my most prized possessions, the little shits.
AND. Where was the cat? Sneaking around angling for easy food? Or cuddle. Hmph. 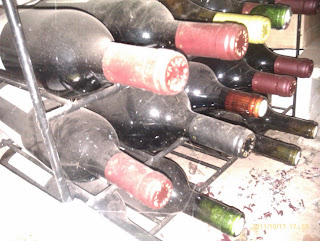 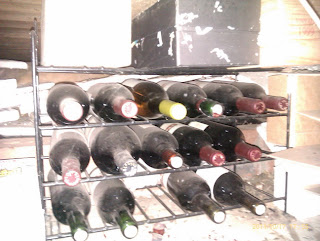 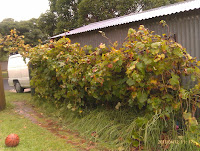 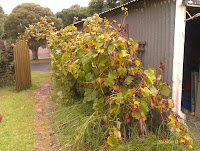 Picked the Foxy Garage Grapes yesterday, 33 kg at 22 Baume. Not sweet enough, but certainly STICKY!
The ants, bees and birds thought it was time to harvest, so I did. Bugger them! 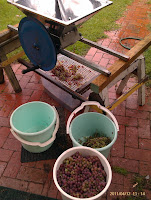 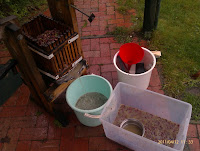 So in the end, today, crushed and pressed about 15 liters out at 1.080sg, and have some pomace to distill too! I could not press out the skins 100%. Plenty of flesh, so what the? Added 2kg sugar and 2 liters water. That worked last year, terrible tasting, but enough % to put through the still! 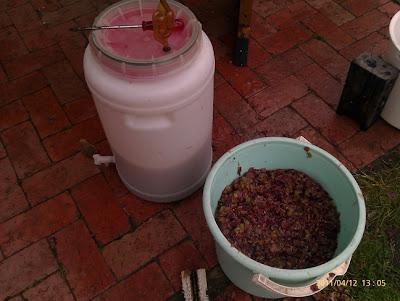 So PMSd the must so to put commercial yeast in for the fermentation, and will let the pomace ferment off the indigenous yeast.

Stay tuned- I intend to try a sherry variety this year!
Posted by tony ford at 7:23 PM No comments:

Reference to older Blogs on past Vintages

I established an online diary of attempts at  my first winemaking here
Posted by tony ford at 7:22 PM No comments:

[a repost] from earlier in the year
Today

The Portable Vineyard was finally weeded, tended, fixed, fertilized and mulched. There were new buds on the potted vines on 1 September, and now the established vines are budding too

The nursery plants were also fixed up, with some re-potted.

What is it?
Last count was 29 Shiraz/Syrah vines in pots at various stages- 15 fruiting vines, the rest the nursery vines. There are also 6 chardonnay and 2 Pinot Noir vines along the veranda that are producing, the birds got last years chardonnay, and the liter of pinot wine turned to vinegar, but it was a great red wine vinegar! there was a real sense of achievement when spaghetti bolognaise tasted just fine with it added.

In a addition to the potted vines are the original 6 vines planted in 1999 out along the back fence (4) and next to the shed/bungalow (2). These are the origins of the Portable Vines, cuttings propagation.

Production currently
Last year I managed to coax enough fruit for 5 liters, or nearly 6 bottles of shiraz, and the same this year.

The wine from last year was really nice, I don't think any is left to mature more than a year! I could be wrong... I will have to check the Micro Wine Cellar. I am pretty sure there is none in the Alcoholery*!
[ *That's the Beer/Wine/Spirit Making Shed, abbreviated from "Brewery/Winery/Distillery Ex-car Garage". ]

But Why?
When we bought the place (1998) there was a vine against the garage. After the first summer there was HEAPS of grapes. I asked a home brew shop owner what could I do with it. I had to buy a beer brewing kit, and also enough ingredients to make Milk Stout.

So that is why I make wine at home.

How
From a book published in Australia, I learnt that about 50 wine grape vines would be a fine idea to make enough for a years consumption- up to 50 bottles a year I think was the idea, but when you only have a quarter acre, you have to compromise... So when pruning three year old vines, I kept them to make cuttings propgation, and that started it all.

Now I have a shelf full of wine making and beer brewing books.

A garage full of brewing equipment. And bottling stuff and Bottles...

I read about Canadian Ice Wine- a sweet wine made by letting the berries freeze, and squeezing the unfrozen juice out to ferment. The vines were grown in old barrels, cut in half and mounted on trolleys!  I guess that this was so that they could be wheeled in and out of the barn or green house for winter.

So that is why it is a Portable Vineyard, if I have to sell up, it all comes with me!
Posted by tony ford at 7:02 PM No comments: 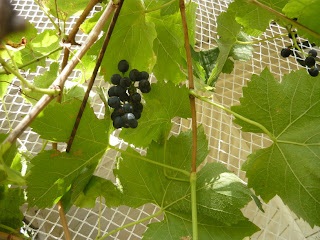 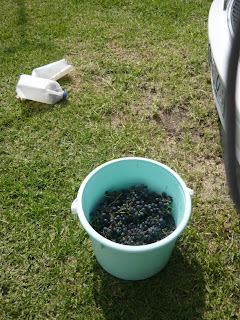 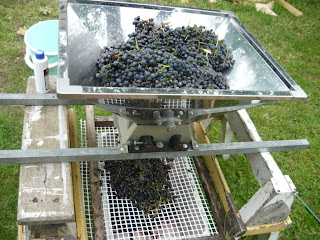 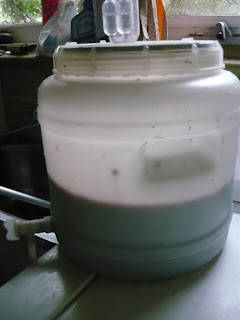 There was not much to pick this year- I do not know why. About 50% of the bunches were no good, and it was almost individual berry selection! Some had dried up or were mouldy or rotten, painful.
The Pinot Noir was so promising too, so it went in with the Shiraz, and I ended up with about eight liters- should make nearly 6 bottles!
Plan to make port this year, use some of the distilled ex-wine from last year, just have to watch that density carefully, and leave some sweetness!

If the crop was going to be excellent, did plan to get in some pickers, and have a barbie. Ah well.

Today was wine pressing time.
After careful consideration- [tasting the must] it was decided, and all by myself, that there was not enough sweetness to pursue my goal of making some port. Bugger! I had some excess spirit to add as well.
People may like dry port, I do not.
So the next procedure was to choose to press now and separate the skins, or let it ferment out for a few more days.
Press it.
The homemade press was wrestled out of the [crowded] Alcoholery to the lawn and the hose readied to wash down everything after a bit of a scrub and sanitisation of containers and press.
Before the rain arrived. Again.
More time cleaning and preparing than pressing- what is it with pressed for time anyway- it was over and done with between job shifts!
Ended up with about 7 and a bit liters, with any luck about 6 bottles in the end. Again!
The taste at the moment is not lush and ‘thick’ like last years vintage, which had to be diluted and blended. This years vintage is lighter- I think because of the mix of Shiraz and Pinot Noir, at about 6 to 1.
It is not that pleasant as yet, after a few more days and some some more treatment with the bentonite, it may be nicer- fingers crossed- or to the Still It Goes.
Posted by tony ford at 6:46 PM No comments:

Well, It guarantees a good result
Looking after a backyard grape vine


Last week, mid October, and this week too, I was keen on keeping the vines growing up tall and strong, tending the baby ones carefully too. One to two liters every other day of tap water and a snail scan. Eggshells are good for that job, but we do not eat eggs more than once or twice a week at the moment, so that organic pesticide is low...

Looking for a reason to learn more about caring for them, I found by accident a site that wanted to sell me a great guide or at least a downloadable pdf file.

The Complete Grape growing Guide by Danie Wium "The Grape Guy" and based around an intersting concept of growing 45 pounds of grapes off a single vine...

Well, I have skimmed through and re-skimmed for relevancy to wine grape growing and found it somewhat useful. When I have an acre or two, I will look forward to 45 pounds of fruit off a vine-, that would make nearly 22 kg, or about 16 liters of wine, per plant. Wow, thirty plants now, means-- 500 bottles?!?

The other day, I went for a walk through the vines looking for faults and all, and saw that the wind during the week had kindly broken a few new canes off two of the vigorously growing Pinot! Bugger, as there was a couple of bunches-to-be, lost. In fact, the Pinot is wildly vigorous, so much so that I needed some pointers from the guide. I may cut down the watering to twice a week now, but still give the nursery plants water as soon as the top soil dries out. Soon as the caps fall off, in with some pest and mildew spraying.

The rest of the plants were looked at and from what I gather, any suckers, and, I gathered, non fruiting canes should be removed, so I did that to the Pinot and Shiraz.

Non of the year old plants showed any sign of fruiting this year- so that's good. The two year old plants are not so vigorous, one has some fruiting canes though, and will leave it be. The cuttings are coming along, any that were not leafing up were removed.

From the SBS television programme "The Wine Lovers Guide To Australia", I think I may have identified the Garage Foxy Grapes as Gerwurtz Traminer, red berries, large, perfumed, and it gives 30 pounds per bush! Currently, last years vintage is being fortified, and is not too bad as a sweet, nearly cloyingly sweet, aperitif. IMHO anyway.

new Vines not making it

Failed, the new Vines not making it.

No swelling buds- last opportunity?
Are the transplanted vines are mostly either dead or severly in hibernation?
A spur cut shows some green matter, but the buds are dry, or eaten?

A fail. Hate that. A friend gives me some freebies, and I have let most die off.. Apart from three, or two at least.
Bad management?
Too optimistic that nature can do it all?
Pruning too harsh?

The rest of the Portable Vineyard

Currently the rest of the vines are doing so well, leafing up and the flowers are starting to emerge, and I will have to spray those with some honey and sugar solution to encourage the bees away from the other flowers in the garden.
Posted by tony ford at 2:57 PM No comments:

Spring 2011
Pinot successful! Yay me.
Shiraz- pots and in ground have also survived the severe prune management technique.
Posted by tony ford at 2:11 PM No comments: