Reading of a local winery's Spring Buds 2013, I thought I better check my collection of "Ragedy Annes" out in their pots, to see whether I had some spring buds.

Yep!
As of the 20th August, the Pinot and the Shiraz potted vines have wee little spring buds movements! Some have leaves out and all!

Not as well budded as the winery over the hills and vales to the northwest, but definitely erupting. Even the "bay" vinrs had slight Spring buds

Comparing Spring buds with last year- seem to be earlier by a week... I wrote in the first week of September- first week of the Southern Hemisphere's Spring- that the Portable Vineyard vines had budded. No! And- The vines budded by 20th August in 2011 too.

Maybe Global Warming aint happening...
Posted by tony ford at 9:48 AM No comments:

All the bunch ready potted vines line up down along the side fence for winter now, ready for spring bud time- about to occur quite soon.
Over forty portable backyard vines now, with eleven or so one year olds re-potted.
Re-thought the irrigation- get that lined up down the fence line this year, maybe a timer of 2-4 liters per day- or enough to fill the cut down and nearly buried 2 liter containers 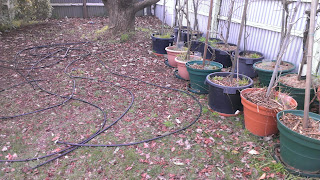 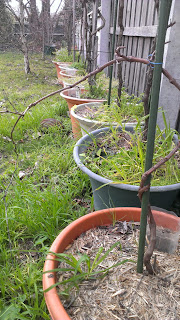 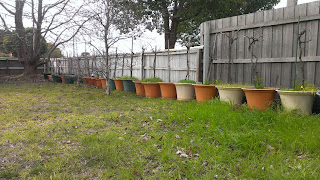