Stout is Okay After All


The chocolate stout batch has worked out okay after all.
Which is good, because I did not really want to convert it to some thing else.

And tastes good too! 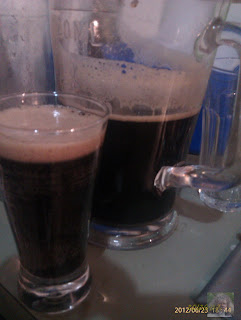 What went wrong? What made a Woeful Dark Ale?


The constituents too old?

Three weeks ago, I decided that time was up for a new stout batch.

Digging[true] through the Alcoholery's cupboard, on the shelves were a can of Oatmeal Ale mixture, some old dark liquid malt, bag of lactose and a bag of glucose. And a bag of choclate'd malt grain. And liquorice essence. Should be enough to make a dark ale at least.

I wanted to make a "Whitbread/Mackesons Milk Stout" type.

This would have to do.

The can was at least four years old, so the yeast was probably not going to work.
The malt was looking a bit sad. So I boiled the lot up, grain was pressure cooked then rinsed through, and the can instructions said it made enough for only ten litres. Whoa- but I thought with all the extra stuff, made it up to about 25 litres.

Down to the homebrew guy, got some more yeast and verily started again. A slow ferment this time, v e r y s l o w...

A week later, tasted okay, racked to another 30 litre vat to settle it out.

Worked out at about 5% on the vinometer.

Bottling the lot was easier said than done, and the capping was difficult too. I think the rigid old capper has gone too bell shaped to seal the caps onto the bottles properly. Because...

Last night, cracked one bottle  in order to share with eldest progeny, and then a second in disbelief. The dang ale/stout was FLAT!

No carbonation after almost two weeks.

Either the seals are buggered, or there was no yeast left in the liquor to carbonate with the teaspoon of sugar per bottle.

Looks like a batch to d'stil from, at 6% should recover something from the odd 25 liters.

If you make home brew- any suggestions? What went wrong with my Woeful Dark Ale? I welcome some comments on this.
Posted by tony ford at 4:34 PM No comments: