Our Longford grapes Shiraz, the Hofford 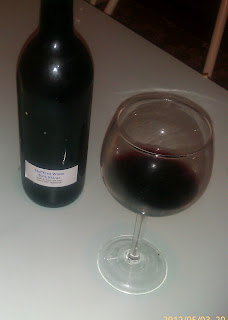 My good friend Harry and I, made some red wine in 2006.
I have just opened a bottle of Vintage 2006 and it is ooh la la, beautiful!

The grapes were shiraz/syrah.

The vineyards are from across the river south of where I live, and grown in a  combination of sands, gravels and marl, basically a 'limey' situation. The area was used for a gravel pit once upon a time. The sheep farm where the vineyard is based is above the marshes or morass at Lake Wellington. Cheers Vintage 2006!
The growers- Lyn and Harry Stephenson.
The acreage is small, two yards 110x90m and 70x100m.

Wine made from these grapes have won awards for vintners who were capable of paying two dollars a kilo. Yep- 2 grand a tonne! Harry and I of course were only doing wine making at home, of 100 and 50 kilos respectively.

In the early 2000's, so a story goes, a vintner from west Gippsland was interested in some Gippsland limestone country grown shiraz grapes [?] and gave Lyn and Harry tips on what he wanted if he was to be a primary customer. The vines were carefully tended, and cropped back to avoid over-cropping and reduce disease favourable conditions. A second vineyard was created in the actual gravel extraction areas. This idea is similar to the French winemakers and grape growers idea of limestone country, the terroir for growing Pinot Noir- limestone or marl.

That vintner won an award one year, and my friend Bob of Tuckers Vineyard who I worked for 2004-2008 also won a medal for his 2004 Shiraz. But guess what? I think mine and Harry's is far better. Sorry Bob

We selected and harvested our own grapes from the old vines. We took them back to a backyard- Harry's or mine, and processed the grapes. The next day, yeast was added. A week or so later, the lot was pressed, and the waiting began...

So every year a few bottles were enjoyed.

I think I have opened my last one. But shit a brick, it is NICE!
Cheers to a few people, chin chin Tarn, Harry, Bob