But failed with the garage grapes


Looks like I should have harvested last week. The summer growth was good in the backyard grape vines that had grapes left after the mildew attacks. Daily checking resulted in a pleasing appraisal for the expected harvest. But.
Just picking a berry and measuring the sugar level is not good at the last stage without careful checking on all the bush, not just the nearest odd bunch.

Last week was the usual time of the year to pick the Garage Foxey Grapes, but the sugar levels were not great, so I left it for another week, and , DoNG! 20 Brix was okay, but waiting for 25...

Wrong, shoulda done it when I first smelt the rotting like smell a few days ago. It means every critter wants a bite. A bird was hiding in there too! Small grubs or caterpillars, bugs, argh!

I just thought to pick tonight while the weather was good after a wettish week, but as I pulled the nets off, it was oh no! Rotting or mouldy berries in nearly every bunch. Bugger.

The Pinot was nearly the same, very small but tasty berries, and dehydrating compared to last week. Failed again.

Picked them anyway, and have crushed them all into one container, and will see what happens. With the rotting and mildewy odd berries (had to be choosy on what was worth keeping), will hit the lot with some SMS tablets, and drop some commercial yeast in. 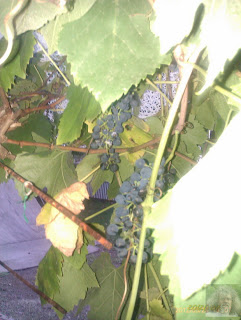 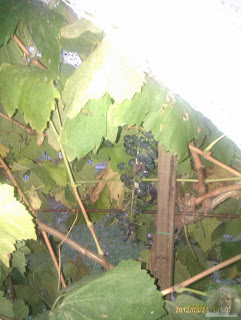 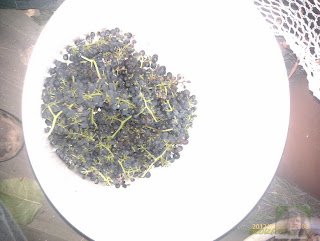 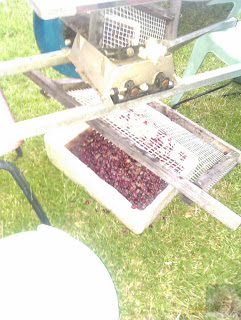 Garage Foxey Grapes, one third the usual harvest this year.

More on the fermentation next week.

Overall, the Portablevineyard has had a very poor year, bugger. After fourteen Vintages, the worst probably.
Posted by tony ford at 8:22 PM