I bought a "new" compound based on copper to fight the recent mildew attack on the Portable Vineyard vines,  notably, the Shiraz/Syrah vines. Since the first two sprays, separated by ten days as recommended, the old infected leaves and any new ones that have also been seen to be infected, have been removed by hand. This has been a painful lesson, as each vine has a few leaves... But what especially annoyed me last week was the rubbish collection service! The bin was emptied, but all the infected leaves and canes fell out as the truck emptying mechanism, or the operator, let leaves (and cat litter gravel and poo) actually spill over the street as it was emptied! Hmph!!

Anyway, it looks like the canes have enough energy to put new sprouts out on them all! There is still more to do, and I think a daily walk through the yard should keep the disease out! 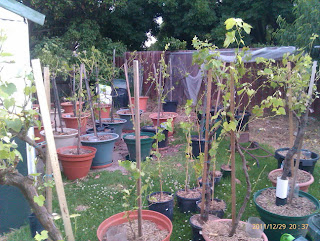 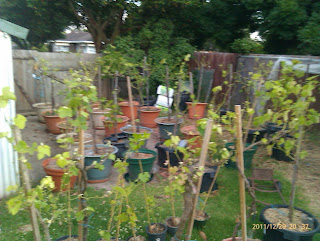 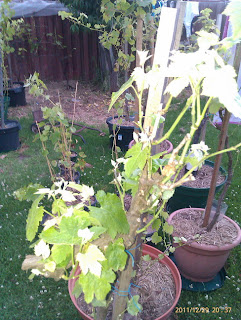